One company is working to push menu boards into the future through a glasses-free augmented reality experience called HoloLamp, which delivers virtual menu items to customers. 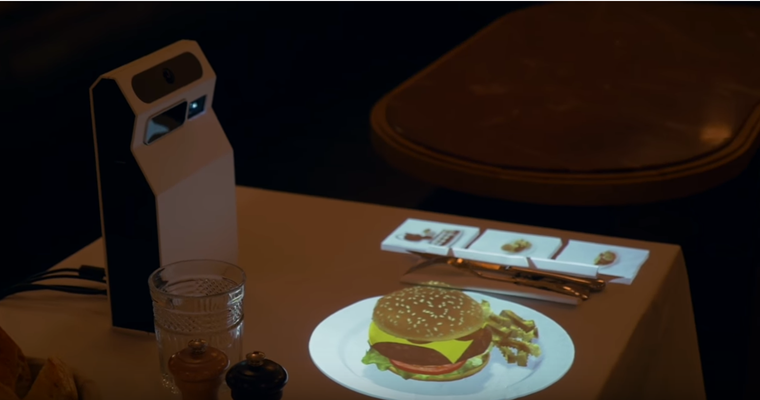 Most customers are used to seeing digital menu boards in restaurants today, especially with giants such as McDonald's deploying them across digital menu boards. But they can become old and stale if they don't engage consumers. One company is working to change that outcome via a glasses-free augmented reality experience called HoloLamp, currently in the prototype phase.

Putting 3D on the menu

This prototype "lamp" displays 3D illusions directly on the user's table. Customers can use it to take a closer look at menu items.

"Using the lamp, the user sees the 3D content directly on the table top, from all angles with the correct perspective, and can interact with it in a natural and intuitive way," Guillaume Chican, founder of HoloLamp, said in an interview. "The projected 3D dishes show photo realistic details that encourage the consumer to order the dishes, in the same way as a cooking magazine shows tasty 2D images to make people want to eat the pictured dish."

Customers have an interactive touch board on their table to select various menu items. The menu items will then materialize on the table, giving customers an idea of what they will be getting. They can then order their food directly from the touch board, according to a video. Because the lamp is in the prototype stage, there is no pricing information, yet.

One of the major barriers to AR and VR in retail and restaurants is that most customers don't want to wear the bulky glasses in public. Some companies attempt to get around this by integrating a AR experience into a smartphone app, but Chican sees this as a downside.

"People do not want to wear AR glasses in a restaurant, and holding a smartphone makes the experience less convivial and less immersive as the user does not see the environment directly but a screen. HoloLamp is the unique solution for this field," Chican said.

Getting the right portions

A customer's idea of a portion and a restaurant's idea of a portion are often two different things. This can be a troublesome issue for restaurants, especially when customers send back food or complain about the portion sizes. HoloLamp attempts to solve this issue by displaying exactly what the customer will get.

"The lamp is boosting the dining experience by allowing the diner to select and view the dishes in 3D directly on the table top, the correct portion size and the aesthetic of the preparation. The diner is then able to know the dishes he will eat. It removes the unpleasant surprise, which can occur with a paper menu upon reception of the dishes," Chican said.

This technology is part of a broader trend of delivering better customer experiences through interactive, relevant content. Restaurants need to be able to deliver not just tasty food but also enjoy rewarding experiences.

Customers need to come away feeling as if their needs and wants have been met. One way to do this is to give them greater control over their meals, such as custom order kiosks or giving them more information, such as portion sizes via HoloLamp.

And if customers have a good experience, they will likely come back for seconds.

You can watch the HoloLamp in action below.

Bradley Cooper is the editor of ATM Marketplace and was previously the editor of Digital Signage Today. His background is in information technology, advertising, and writing.