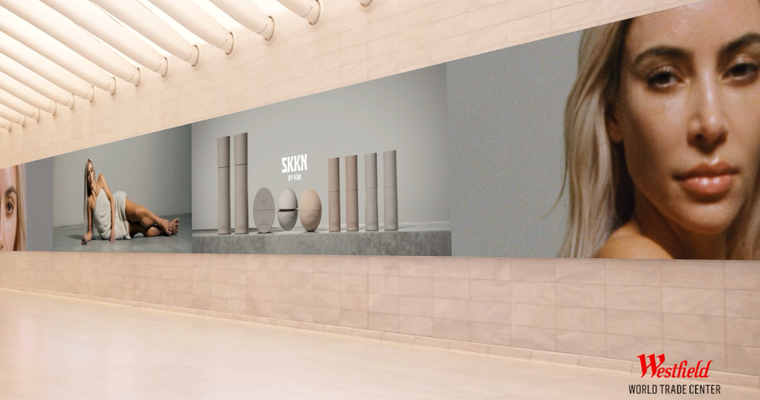 SKKN by Kim, Kim Kardashian's line of beauty products, has partnered with Unibail-Rodamco-Westfield to launch the first ever 3D digital campaign on the 100 yard screen at the Oculus, according to a press release.

The campaign will run through mid-October and features Kim Kardashian wearing various beauty products along with video and images of the products themselves, with 3D effects applied to products including the exfoliator, eye cream and face cream to create a virtual sampling experience, according to the release.

"With commuters and shoppers returning to the World Trade Center campus, it's the perfect time to bring the latest in digital media to the iconic screen in the Oculus with a true icon herself — Kim Kardashian," Colin Shaughnessy, executive vice president and director of U.S. Sales for URW, said in the release. "While we've helped a number of luxury brands tap into our audience in one of New York City's largest transportation hubs, we are thrilled that SKKN BY KIM will be the first to use the power of The Westfield Network to reach and engage consumers in this dynamic and highly engaging way."

See samples of the campaign below!