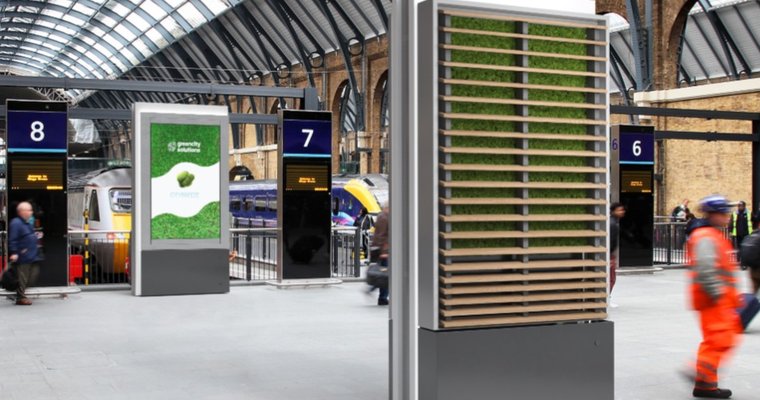 Known as CityBreeze, the digital signage units contain regenerative air quality filters made from moss. The plant can attract and metabolize pollutants such as black carbon and nitrogen oxides, removing them from the atmosphere. It also cools the ambient air by evaporating water across its large surface, according to the release.

The display contains a 75-inch LCD screen controlled by a BrightSign HD224 media player. Each unit has the capacity to filter 50,000 cubic feet of air per hour, removing up to 82% of the pollutants contained in it and reducing its temperature by up to 7 degrees Fahrenheit.

"City authorities are very concerned about air quality and the increasingly problematic 'urban heat island' effect," Simon Dierks, marketing lead for Green City Solutions, said in the release. "But the cost of installation and lengthy planning processes for environmental infrastructure can be real barriers. Every town already has fixed locations for OOH screens, however, and they need to be replaced every eight to 10 years. When that happens, upgrading to a biotech system that also purifies the air and reduces the ambient temperature instead of increasing it makes a lot of sense."

The advertising revenue the screens generate can be used by city authorities to cover both the installation and maintenance costs of the screens. Brands can also run ads on the screens. Green City Solutions uses BSN.cloud for scheduling and uploading media.

The first CityBreeze kiosk was installed in Küsnacht, Switzerland in 2021. Green City Solutions expects to sell between 100 to 150 more in the U.K. and Europe by the end of 2022.

"Green City Solutions has developed an exceptionally innovative business model, and BrightSign is proud to be involved in a project where signage is contributing directly to improving city air quality, and the environment as a whole," Jeff Hastings, CEO of BrightSign, said in the release. "We wish them every success with their forward-thinking concept."

INCLUDED IN THIS STORY

BrightSign is the global market leader in digital signage media players, offering the most reliable, secure and sophisticated solid-state media players on the market today.